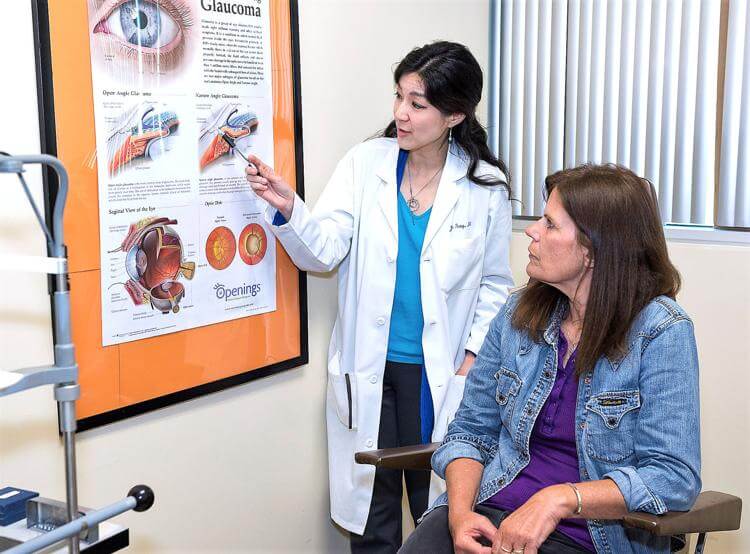 Blurry vision forced Christine C. to focus on her health.

The Long Beach resident said she knew that regular eye exams were important, but she hadn’t scheduled one in a while. Her eyesight scare spurred her to immediate action.

Christine’s mother lost her vision to glaucoma and Christine said she was afraid of a similar outcome, since family history greatly increases the chance of contracting the disease. Unwilling to wait six months for an ophthalmology appointment through her insurance company, Christine searched for a better solution and found EyeCare America. For the past 30 years, this organization has teamed with volunteer ophthalmologists to provide eligible patients with no-cost eye exams.

Twin doctors Julia and Alice Song share a practice with offices in Long Beach, Los Alamitos and Pasadena. The two say they are staunch believers in outreach; yearly medical mission trips have taken them to Mongolia, Mexico, Thailand, North Korea and the Philippines. Ten years ago, EyeCare America asked the Songs to offer free exams to eligible U.S. patients. They agreed.

“If you find and treat eye diseases before they become more advanced,” Dr. Alice Song said, “the outcome is better for the patient and for society. Some people become disabled from problems that could have been prevented by regular exams.”

“My mom’s vision loss was frightening… I can’t even imagine,” Christine said. “I felt very grateful to have assistance from EyeCare America. They had a questionnaire, so I filled out the info and I fit the criteria. Then they sent me something in the mail setting up my appointment with Dr. Song. She was great.”

Christine said that glaucoma doesn’t give warning signs, it just attacks. At that point, she said, it’s usually too late.

“My blurred vision wasn’t related to glaucoma, but it got me to make the appointment,” she said. “I had the surgery done and now I’m good.”

“If we catch problems early enough,” Dr. Julia Song said, “there are ways to help people. Christine C. was worried about her family history; her exam identified a problem and a solution. Our job as health care professionals is to help people find their way.”

The Song sisters haven’t limited their care to humans. Over the years, they have treated the eyes of some of their patients’ pets and even adopted a blind puppy. The two women said they couldn’t resist “Pappy,” who is part Papillion, after seeing him at a shelter two years ago. Although they said they couldn’t restore his sight, they put bubble wrap around the obstacles in their home and made him part of the family. Outreach seems to be integral to the doctors’ DNA.

To learn more about EyeCare America, go to www.aao.org/eyecare-america.

Repositioning of glaucoma tubes into the pars plana for refractory malignant glaucoma: a case report

Repositioning of glaucoma tubes into the pars plana for refractory malignant glaucoma: a case report.

Malignant glaucoma occurs when the intraocular pressure elevates in the setting of a shallow anterior chamber and patent iridectomy. We describe a case in which malignant glaucoma that was refractory to conventional treatment and complete vitrectomy was successfully managed by rerouting the glaucoma tubes into the pars plana.

A 47-year-old Latino man had a history of neovascular glaucoma and subsequent peripheral anterior synechiae. He was status post-two glaucoma drainage devices. He developed pupillary block. Laser iridotomy was performed without complications. He subsequently developed malignant glaucoma that was refractory to yttrium aluminum garnet capsulohyaloidotomy of the anterior hyaloid. He underwent pars plana vitrectomy with successful control of his intraocular pressure. After 2 weeks, the malignant glaucoma recurred. He underwent repositioning of the tubes into the pars plana with successful control of his intraocular pressure.

In rare cases of malignant glaucoma refractive to yttrium aluminum garnet hyaloidotomy and vitrectomy, placement of glaucoma drainage devices is a reasonable alternative.

To investigate the clinical features, time to diagnosis, histopathology, treatment, and mortality rates of patients with sebaceous cell carcinoma.

This was a retrospective, consecutive series of patients with sebaceous cell carcinoma at a tertiary referral medical center. Between January 1984 and January 2006, 31 patients with sebaceous cell carcinoma were evaluated at the Department of Ophthalmology and Visual Sciences, University of Iowa Hospitals and Clinics. The main outcome measures were clinical presentations, treatments, reconstructive procedures, and outcomes.

Thirty-one patients were diagnosed with sebaceous cell carcinoma of the ocular adnexa on histopathology. Twenty (65%) of the patients were women and 11 were men. The upper eyelid was involved in 18 patients, lower eyelid in 10, both upper and lower eyelids in 1, and caruncle in 2. Twenty-three patients had in situ disease, pagetoid disease, or both. Eight patients reported symptoms for less than 6 months and 22 had symptoms for greater than or = 12 months before the diagnosis of sebaceous cell carcinoma was made. Local surgical excision of the tumor as initial treatment was performed in 25 patients. Exenteration was the initial surgery performed in 4 patients. Two patients died from metastatic sebaceous cell carcinoma.

Sebaceous cell carcinoma has varied presentations and is commonly misdiagnosed. Tumor-related deaths occurred in only 2 patients (6.7%), which is lower than previous reports and may be related to earlier detection or improved surgical excision techniques.